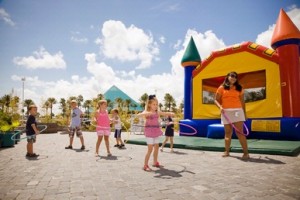 While the Moody Gardens Hotel is known for its spectacular rooms and amenities such as the spa and convention center, it is actually a wonderful place for kids to stay. The Moody Gardens hotel has a ton of activities and perks for the kids. Read on to learn more about our family friendly accommodations.

Kids Eat Free: Yep, you read that correctly, free! Everyday, with the purchase of an adult entrée at the Terrace Restaurant, your little one, under the age of 12, gets a free meal! The free meal includes anything off the kid’s menu or buffet for breakfast, lunch, and dinner. You’ll have a well-fed family and a well-fed wallet.

Pools: The swimming pools are a great time for kids of every age! While parents relax amongst the lush gardens and waterfalls, the children are jumping in the water or grabbing afternoon treats from the poolside snack bar. Summer and holiday time call for special poolside fun such as face-painting clowns or a tropical bounce house. The outdoor Jacuzzi is enjoyable for everyone year around, so no matter what season you visit Moody Gardens Hotel be sure to bring your bathing suit!

Kid’s Crew: Kid’s Crew activities will keep your children busy and entertained throughout their visit. The activities include arts and crafts, a bounce house, kite flying, scavenger hunts, karaoke, Wii competitions, movie nights, clown face painting, and more. Kids can also play on the outdoor playground or test their logic skill with the Giant Chess Game. The best part is, all the Kid’s Crew activities are free for hotel guests! Activities are seasonal and change daily, so the fun is always different.

The Moody Gardens Hotel is the perfect place if you’re looking for family friendly hotels in Texas. Our family friendly hotel is sure to please every member of your family. Don’t forget to check out the Moody Gardens Attractions, such as the Aquarium Pyramid and the Rainforest Pyramid, while you’re here for more entertainment! We’re also offering a special holiday deal at the spa! Take time to relax while your kids are out having a great time.

Remember those bar hopping nights? Well now it’s an official event. Grab your buddies and hop on the bus. With a free 2012 t-shirt and koozie, the ride will take you to different places to purchase special feature selections at Pub Crawl Stops.

And if you want something to make you feel real special, then check out the Taste It First selections. That’s right, be the first to taste new brews from Cedar Creek, Fort Bend Brewing, No Label and Southern Star before they hit the store shelves.  From the makers of Texas Backyard Blonde, Lawn Ranger Cream Ale, El Hefe and Pine Belt Pale, these guys are brewing up their next fan favorite!

According to Brewers Association records there are now almost 2,000 craft breweries in the United States and growing. In 2011, craft beer sales grew more than 13%. Join fellow craft beer lovers and supporters of this independent craft as they gather Labor Day weekend to sample more than 400 specialty and hard-to-find brews at the Third Annual BrewMasters Craft Beer Festival. This annual foam fete takes place at Moody Gardens Friday, August 31 through Sunday, September 2, 2012.

The three-day celebration will showcase two signature events: BrewLicious in the Ballroom and BrewHaHa Grand Tasting, both of which have VIP experiences, as well as the regular ticket. There are a host of related events like the BrewMasters PubCrawl and Texas Brewery Tasting Tours. Featured activities include: live music, beer and food pairing seminars and dinners featuring renowned chefs, educational events, and a slew of Brew Brains and industry experts including award-winning BrewMasters. Sunday, September 2 will feature a new event called Tex-E-Que which will feature a live concert.

“We’re fortunate to have multiple micro breweries right here in Houston and many others throughout the region, said event founder and organizer, Clifton McDerby, principal of Food & Vine Time Productions, Inc. “This event is dedicated to showcasing the voluminous and explosive industry that is craft and specialty brews and it just keeps getting bigger and better along with the craft beer industry,” added McDerby. “We started as the largest beer festival in the state and we plan to give Texans even more including the largest selection of Craft beers available at any Texas festival. Plus, we’ll continue to feature Taste it First at BrewMasters selections where we’ll be bringing to market beers that haven’t been tasted before since the brewers are holding off the beer’s release to showcase them first at BrewMasters Craft Beer Festival.”

Also on tap is the BrewMasters Pub Crawl Friday, August 31 at 8 p.m. Hop on board this festive party bus with a tour to some of Galveston’s coolest bars and meet featured Brew Brains at each stop.

Saturday, September 1st sample some of the best available brews in the world at the BrewHaHa Grand Tasting held in the Moody Gardens Expo Arena, featuring over 400 craft and specialty brews and more than 30 wines. Admission to BrewHaHa is $35 in advance, $40 at the door, $75 for a VIP ticket, or guests can purchase a VIP or general admission two-day Hopper Pass. The BrewHaHa Grand Tasting will run from 3 p.m. to 6:30 p.m. and includes access to multiple beer seminars on the Spec’s University Seminar Stage, a fun and educational experience for all who take pride in their beer and want to expand their knowledge of craft beers.

Sunday, September 2nd offers the new Tex-E-Que and concert. For a $10 cover charge, beer lovers get their pick of 400 selections for a flat price per bottle. Get them while they last and boot scoot the night away.

For more information on the BrewMasters Craft Beer Festival, visit www.brewmastersbeerfest.com or call 713-557-5732.