It was a SLOW week…

It’s a slow week around the world. A Slow Loris week that is! 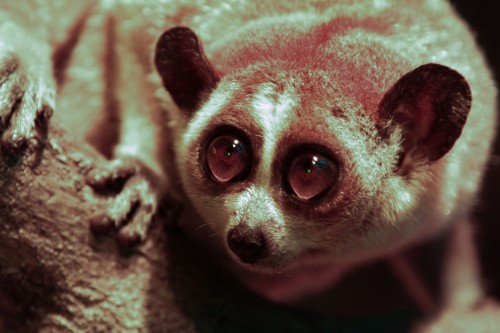 Now in its fourth year, Slow Loris Outreach Week (S.L.O.W.) is aimed to bring awareness to the rapid decline of one of the world’s most endangered group of primates. SLOW lasts until Sunday, Sept. 14.

The week was started by “The Little Fireface Project,” the world’s longest running Loris conservation project. The Project started in 1993 under the supervision of the Nocturnal Primate Research Group of Oxford Brookes University.

So what exactly are Slow Lorises? Here are some facts about these unique primates.

• There are five types of Lorises – Sunda, Bengal, Pygmy, Javan, and Bornean.

• The name Little Fireface comes from the Sundanese name for Slow Loris – muka geni. In other languages, Loris means thin one, wind monkey (both in Sumatra and Thailand), forest baby, and the shy one.

• Slow Lorises are actually venomous, making them the only poisonous primate in the world. They produce their venom by combining saliva with oil from a gland on the upper arm. This poison can cause anaphylactic shock, and even death, to humans.

• Each Slow Loris species is recognized as either vulnerable or endangered by the International Union for the Conservation of Nature. Threats to the Slow Loris include illegal pet trade, hunting for traditional medicinal purposes, and habitat loss/destruction.

You can see two Pygmy Slow Loris girls, Blackwell and Cai, at the Moody Gardens Rainforest Pyramid. Moody Gardens is a part of the AZA Species Survival Program, which is responsible for developing a comprehensive population Studbook and a Breeding and Transfer Plan which identifies population management goals and recommendations to ensure the sustainability of a healthy, genetically diverse, and demographically varied AZA population. Blackwell and Cai were both born at Moody Gardens.

To learn more about SLOW and what you can do to help, visit www.nocturama.org.