Well, folks, we have good news to share with you.

On Monday, Feb. 15, we welcomed our first king penguin chick of the year into the world! The newborn weighed in at healthy 190 grams and is growing rapidly by the minute! Lando and Littlefoot are the parents.

We found shell fragments during our morning cleaning, and sure enough, egg had hatched! Throughout the breeding season, our role is to monitor that parents are, well, being the parents. We are there to make sure the birds are healthy and provide support only when needed. 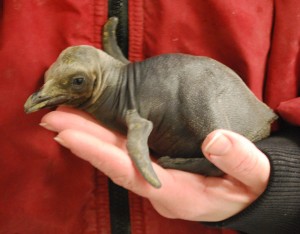 Being from the Southern Hemisphere of the world, and more specifically, South Georgia Island, the penguins observe opposite seasons from Texas. This makes winter in the Continental U.S. their summer time and the prime breeding season. King penguins, unlike their smaller counterparts such as chinstrap and gentoo penguins, carry the unhatched eggs and newborns in between their feet while the parents take turns. Because of the way the eggs are handled, penguin eggs are much thicker and more durable than regular bird eggs. The incubation period of this species of penguins is longer than that of the smaller species and lasts about two months. Once chicks are born, they also take longer to become full grown.

Speaking of smaller species, we now have a total of four gentoo chicks, all growing healthy, in the back holding area of the South Atlantic Exhibit, where they will remain until they are fledged out and are strong enough to swim. While penguins are built to swim, as chicks, they seem to trade cuteness for buoyancy. By doing this, we can prevent any accidents.

The king chick will be on exhibit with its parents for a few more weeks. Check our Webcam periodically to catch us feeding the birds or just simply watch them chill out.

Celebrate Romance and Revelry in the Gardens

Galveston Immigration with Mission to Help Those in Need