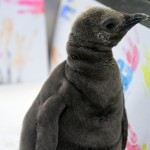 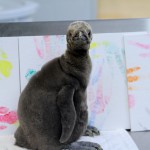 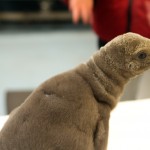 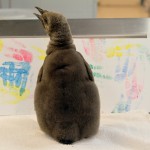 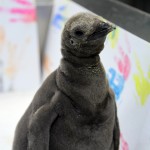 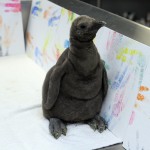 The toughest new addition to the Moody Gardens penguin exhibit has been named after the toughest athlete in the Houston area – Texans defensive star J.J. Watt.

Watt, a baby King Penguin who hatched earlier this month, suffered an injury shortly after breaking out of his shell. Under the care of Moody Gardens biologists, Watt proved he was one tough chick and made a quick recovery. He is back on exhibit, joining the nearly 100 penguins housed in the Aquarium Pyramid.

“The little chick braved through it all,” said Moody Gardens assistant curator Diane Olsen. “It was an injury we had to keep an eye on, and our staff did a good job taking care of it.”

Olsen said she’s not completely sure how Watt suffered the injury, a cut on his back, but said it was likely caused by a squabble between the parent and another penguin. Penguins are extremely protective of their young and will fight those that appear to be a threat to their chick.

Galveston veterinarian Dr. Richard Henderson closed the wound after Watt was injured. From there, Moody Gardens Vet Tech Karen Holcroft and the rest of the penguin biologists treated him until the injury was healed.

“You always have to be worried about infection and stuff,” Olsen said. “We cleaned the wound and weighed him twice a day. We watched it very carefully.”

J.J. Watt is the reigning NFL Defensive Player of the Year and one of the most popular athletes in Houston. He was drafted by the Texans in 2011 out of Wisconsin, and quickly became known as one of the toughest players in the franchise’s history.

Olsen said that like all other chicks, the new King penguin will only be on exhibit with its parents for a limited time. Although adult penguins are expert swimmers, babies must be kept safely away from the exhibit waters until they become water savvy.

The gender of the young chick is still unknown because penguins are not sexually dimorphic, meaning it is impossible to tell male and female penguins apart based solely on looks. While away from the exhibit, blood tests will be done to determine the sex of the hatchling.

King Penguins originally arrived in Galveston in 1998, when a group of staff members from the Aquarium at Moody Gardens joined biologists and other professionals from Chile, France and the United States on an expedition to South Georgia Island in the Antarctic to collect eggs. The eggs were gathered during the fall breeding season and then transported to Galveston and hatched prior to the opening of the Aquarium Pyramid in May 1999.

Moody Gardens has a successful breeding program, with 15 King Penguin chicks hatched since 2003. There has been a total six chicks hatched overall among the King, Gentoo and Chinstrap Penguins this breeding season. This is the first King to hatch this year.