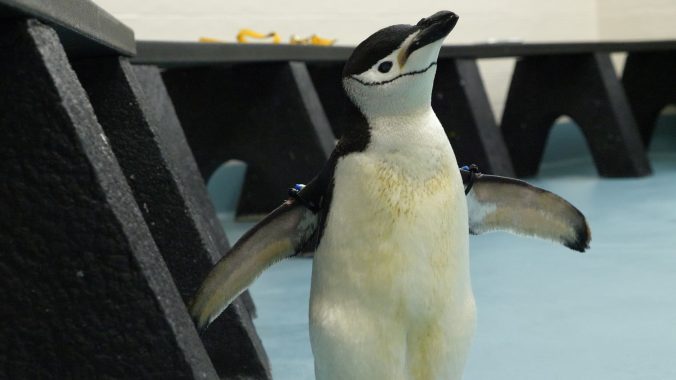 Starring a Chinstrap Penguin Named Fox and a Few Other Gals – the Oldest in North America.

Fox resides in a smaller extension of the South Atlantic exhibit behind the scenes at the Moody Gardens Aquarium Pyramid, along with a few other geriatric penguins that aren’t able to get around as well as they used to. Another Golden Girl is Gandalf, she is also a 37 year old Chinstrap penguin at Moody Gardens and she hatched about a week after Fox. There are three other Chinstrap penguins that are 34 years old in their little community, as well as three more that are still on exhibit and can be seen inside of the South Atlantic exhibit or from home on the live penguin webcam at MoodyGardens.org. Most of the penguins inside of the retirement community at Moody Gardens are female and being recognized as the Golden Girls of Texas.

Fox was collected as an egg by SeaWorld in 1983 and hatched at SeaWorld San Diego. She was moved to Moody Gardens in 2003 and has been thriving ever since. The biologists who care for her liken her to the local mall walkers as she makes her daily laps around the pool to stay active in her senior years. She does have minor arthritis and a degenerated eye due to a detached retina, but she sure doesn’t let those things keep her from having a good time.

Wagner was previously the oldest Chinstrap penguin according to Association of Zoos and Aquariums records and the North American Studbook. He passed away at 34 years old, and called Moody Gardens home; though Fox and the other 37 year old Chinstrap penguins have now surpassed that. This demonstrates the excellent quality of care that the biologists at Moody Gardens take when it comes to their animals. The biologists provide enrichment for the penguins and other animals on a daily basis, enrichment is anything that changes up their environment and makes their life a little different every day.

“We tailor animal enrichment to each individual, for the penguins in our retirement home that may not have the best vision or be able to get around like they used to, we typically use auditory or textile enrichment like jingle bells and windchimes or felt and towels for them to hang out on, “ noted Senior Biologist Maggie Reynolds.

Having these Chinstrap penguins on exhibit allows Moody Gardens to educate the public about the issues that these birds face in the wild. Chinstrap penguins, which are native to the Sub-Antarctic region of the world, are listed as Least Concern by the International Union for Conservation of Nature Red List. However, wild colonies are slowly decreasing in population due to climate change and overfishing. Limited food resources causes these birds to have to travel further from shore to hunt for fish, and therefore renders them more vulnerable to predation and other natural elements.

The Moody Gardens Aquarium Pyramid is one of the largest and most diverse aquariums in the United States. In addition to the Chinstrap penguins, five other species including Gentoo, King, Macaroni, and Rockhopper penguins also call the South Atlantic Exhibit home. The warm-climate Humboldt penguins live in an exhibit right next door to their chilly-aired friends. With over 1.5 million gallons of water, the Aquarium Pyramid houses marine life from five distinct environments. Not only does the collection include penguins, but they also have sting rays, sharks, seals, sea lions and over 200 different species of fish.