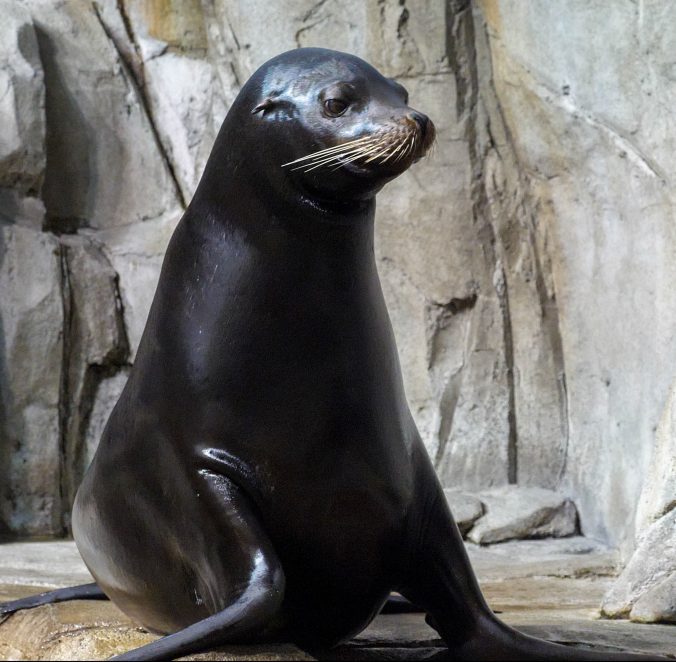 Duke, the California Sea Lion, came to Moody Gardens from the Denver Zoo on May 20th.

The North Pacific exhibit is approximately 20 feet deep and is currently home to four Harbor seals and one other California sea lion named Sam. California sea lions are typically herd animals by nature and Duke is the perfect size and age to make a great companion for Sam. Introductions have begun in the exhibit between the Harbor seals, Sam and Duke. Although it will take some time for him to get acclimated to his new environment, the Harbor seals and Sam are quite intrigued with their new friend. The aquarium biologists are monitoring them closely to see how their chemistry builds in the coming weeks.

Duke recently turned seven years old on June 15th and he is expected to be a social and active addition for the other seals and sea lion in the exhibit. He has proven to perform his animal husbandry behaviors with ease and has been a joy to work with. Blowing raspberries and people watching are a couple of his favorite ways to pass the time, as well as trailing along with his new friends. “Duke will make the perfect companion for Sam, our other California sea lion, and having him here has been a great addition to the North Pacific exhibit,” said Aquarium Curator Diane Olsen.

California sea lions are usually found on islands off of Southern California and Baja California in Mexico, up the U.S. West Coast to Vancouver Island, Canada. Their diets consist of primarily fish and squid and they can remain underwater for an average of 20 minutes at a time. Although their population is increasing in the wild and they are currently listed as Least Concern by the International Union for Conservation of Nature Red List, having California sea lions on exhibit allows Moody Gardens to educate the public about the issues that these marine mammals face in the wild. California sea lions are impacted greatly by human activity including pollution, boat propellers and attacks by domestic animals while pupping along the beaches.
Visit Duke and his exhibit mates inside the North Pacific exhibit inside the Aquarium Pyramid. The Moody Gardens Aquarium Pyramid is one of the largest and most diverse aquariums in the United States. With over 1.5 million gallons of water, the Aquarium Pyramid houses marine life from five distinct environments. Not only does the collection include seals and sea lions, but they also have penguins, sting rays, sharks and over 200 different species of fish.