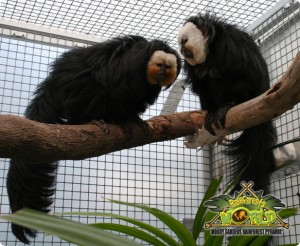 At Moody Gardens, we don’t monkey around. But, we have some residents of the rainforest who do. White-faced Saki monkeys will be roaming the tree tops of the rainforest along with many other fascinating creatures when the Rainforest Pyramid opens May 28th.

White-faced Sakis (Pithecia pithecia) are found in Brazil, French Guyana, Suriname, Venezuela and Guyana. These small monkeys are usually about two to three pounds and can measure up to 29 inches long. They are arboreal (tree living), active during the day and rarely go to the ground. Some have even been found 2,300 feet up in the canopy! These monkeys are fast moving and shy, so very little is known about their behavior in the wild. What we do know is that they eat fruit, leaves, flowers, small birds and small mammals and they move mainly in leaps. Jumps of over 32 feet have actually been recorded by these tiny leapers!

Adult male Sakis are black with a white face and females are a brownish gray color with a narrow stripe on their face between the inner eye and mouth. These monkeys are dichromatic (males are different colors from females) which is a rare trait among Central and South American primates. They have long shaggy coats that protect them from rain and non-prehensile, bushy tails.

These monkeys live in small family groups consisting of the parents and usually two to three offspring. After a 146 day pregnancy, the infant Saki will be born and males and females will have the same brownish gray coloration of the mother. After two months, males will start to take on the coloration of the father. The infants are carried in the flexure of female’s thigh for the first few weeks, but will gradually be carried on the back of the mother.  Sakis communicate by bird-like chirping sounds and they display aggression by fluffing up their body hair and vigorously shaking their body while stomping their feet.

The status of these animals in the wild is vulnerable. Deforestation leading to loss of habitat, as well as these animals being hunted has led to them being threatened. So, come see Frankie, Clyde and Lionel when life emerges on May 28th!

Please see the video below to learn more about these interesting inhabitants of the rainforest (or click here if no video below).

Easter in the Gardens Returns!