The journey began 11 months ago for two harbor seals in peril named Tomato and Ravioli in Crescent City, California. They now have settled into a splendid forever home in Galveston, Texas at Moody Gardens Aquarium Pyramid. Both harbor seal pups were rescued and cared for last year by the Northcoast Marine Mammal Center in Crescent City. Due to health issues both pups were deemed non-releasable to the wild.  Both arrived to Moody Gardens at the end of February and have made great progress since arriving. Tomato and Ravioli officially went on exhibit and made their public debut on July 11, 2018. 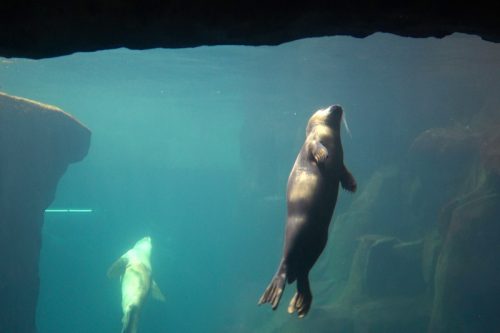 Following their arrival both Tomato and Ravioli needed additional exercise and training to prepare for their exhibit. Originally upon release they would have hunted on their own, so the great people at the stranding center made sure they had some reserves to get by on until they started catching fish on their own. Since they have a new home at Moody Gardens there’s no need for that extra weight, so they have slimmed down to a healthier weight. “Now that they are both at normal weights for their age and species, we are able to take better care of them and provide for all of their needs,” said Maggie Reynolds, Moody Gardens biologist.

Both seals have had their share of personal health struggles. Tomato had severe injuries due to a suspected dog attack. His injuries healed, but did leave him blind in one eye. This attack led to Tomato not being able to forage for himself in the wild deeming him non-releasable.

Ravioli suffers from a vestibular disorder causing her to suffer from neurologic and balance difficulties. She suffered from seizures as well. All of these problems made her unable to hunt successfully in the wild. 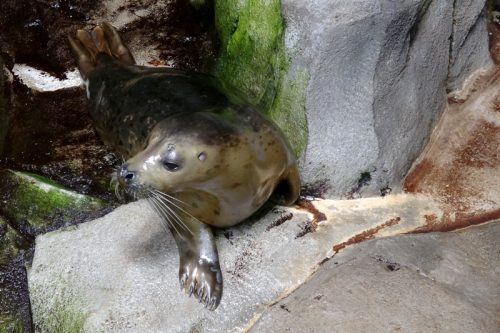 Both seals have had an interesting journey, but it hasn’t slowed down their progress one bit since arriving. “Our focus is healthy, interactive animals who will build trusting relationships with us through positive reinforcement training and enrichment. Both are excited for their training sessions and are learning new things as fast as we can figure out how best to teach them,” said Allison Folsom, Moody Gardens biologist. 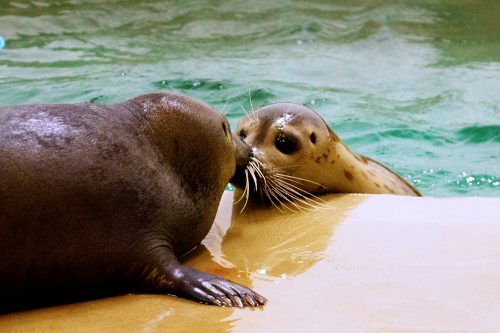 Guests can see Tomato and Ravioli in their new habitat at the Aquarium Pyramid daily, but also on the live seal cam at www.moodygardens.org/sealwebcam which is available 24 hours a day seven days a week.

A Day at the Beach for those with Special Needs