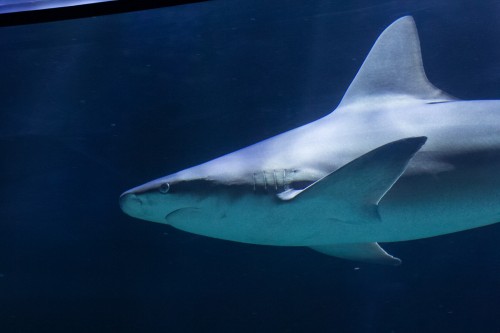 After years of campaigns to bring awareness and promote change, the trading of shark fins has finally been outlawed in Texas.

Texas became the 10th state, and the first Gulf coast state to prohibit the sale of shark fins after Governor Greg Abbott signed a new bill on June 20. The new law is a win for shark conservation groups across the globe, since Texas had become a major location in the shark fin trading business.

Finning is federally banned in U.S. waters, but import and export of them is still allowed in a lot of places stateside. That is no longer the case in the country’s second largest state.

Moody Gardens Animal Husbandry Manager Greg Whittaker helped organize a unified letter of support amongst the 17 Association of Zoos and Aquariums accredited facilities across the state to bring awareness to this growing issue. Whittaker says:

“The International trade in shark fins is convoluted and difficult to track and Texas was being used as a major exporter to Asia with a reported 50% of the US total shark fins transiting through our state.  This legislation effectively closes the trans-shipping loophole and protects the well managed, sustainable Texas fisheries.  It is an important step in closing down the supply lines in a wasteful exploitation of wildlife.  This is a good thing for sharks and we are proud to work with the Humane Society of the US in achieving this victory.”

What exactly is shark finning? It’s a brutal act against one of the ocean’s most iconic animals.

Fishermen capture sharks in the ocean and slice off their fins. The sharks are then thrown back into the water where they either drown or bleed to death.

The process is essentially the ocean’s version of killing an elephant or a rhino for its tusk or horn.

The shark fin is so special because it can make a lot of money. A pound of shark fin can go for as high as $880 dollars. The main use of the fins is shark fin soup, a delicacy in China. The soup normally sells for around $100.

An estimated 100 million sharks are killed each year, with 73 million of those being used to create shark fin. Around 98 percent of the animal is wasted when it is only harvested for its fin.

Shark finning is largely responsible for a major decrease in shark populations. Some species have seen their numbers decrease by 99 percent. Overall, around 32 percent of open-ocean sharks are threatened with extinction.

The new Texas law certainly will help reduce the trade in shark fins globally , but there is still a long way to go. If you want to find out how you can help end shark finning, visit wildaid.org.

Have questions on this? Join us tomorrow for our #MGSharkTalk and our shark experts will answer them for you. CLICK HERE for more info.