A special group of young volunteers spent the summer spreading awareness and raising money for sea turtles at Moody Gardens. While informing the public about the importance of marine wildlife, the SAVY volunteers raised over $2,300 to be given to the Turtle Island Restoration Network of Galveston Island.

The SAVY, the Society for the Advancement of Volunteer Youth, program at Moody Gardens provides students 14 to 17 years of age with the opportunity to volunteer within their community while participating in conservation efforts and gaining experience in various fields. Volunteers worked as advocates on behalf of sea turtles and other marine species that are jeopardized by various human practices around the world. They focused on potential problem Sea Turtles face in the wild and the importance of protecting their species. Their outreach efforts helped them raise over $2,300 for their cause.

Money raised went to the Turtle Island Restoration Network of Galveston Island, a leading advocate for the world’s oceans and marine wildlife. They work to protect endangered species while encouraging the government and public to take action and responsibility in improving choices that effect critical ecosystems.  Turtle Island Restoration Network is a nonprofit organization that saves thousands of sea turtles and other marine species through projects such as the Sea Turtle Restoration Project.

Thanks to the SAVY volunteers, the Island Restoration Network is another step closer to changing the lives of many sea turtles. 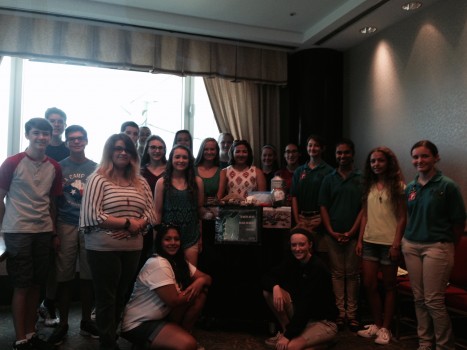