The Birds of Moody Gardens – A lot to be Thankful for!

2018 has been a year of surprises as I’ve been much more aware of the bird activity that surrounds me.  For me and this 410-acre year project, it truly has been the “Year of the Bird”.  I’ve had several chance encounters with unique bird species that were likely there in years past, but I simply wasn’t looking at what was around me. 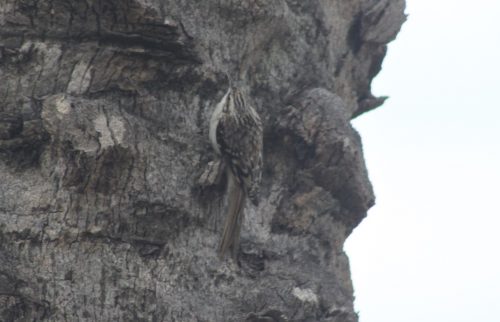 In early November there was a weather pattern that essentially created a fallout of southerly migrating species here on the coast.  The Arctic blast that pushed south across the area on 9 November brought with it a number of bird species that had not been seen very readily through the fall.  The warbler diversity seen on the Island between 10-14 November was impressive with 10 species seen here on property over that long weekend.  Species included; Black-and-white Warbler, Tennessee Warbler, Orange-crowned Warbler, American Redstart, Magnolia Warbler, Bay-breasted Warbler, Blackburnian Warbler, Palm Warbler, Pine Warbler and Yellow-rumped Warbler.  I also encountered Summer Tanager and Scarlet Tanager as well as several Golden-crowned Kinglets alongside the expected Ruby-crowned Kinglets.

Perhaps the most unique sighting was the Brown Creeper pictured above, which was officially my #200 property species on 10 November.  Since then I’ve added Hermit Thrush, Western Meadowlark, Golden-crowned Kinglet, American Goldfinch, White-crowned Sparrow and American Robin for 206.  I did 2 surveys at the Golf Course during this same 4 day period and increased that property total to 134 for the year with Ross’s Goose and Redhead bringing the combined 410-acre year total to 221 species!

The Brown Creeper pictured above is a rare Island visitor that was blown south with the strong frontal winds leading into that weekend.  These cryptic insectivorous birds use their long toenails to grip and their stiff tail to prop themselves up on tree trunks as they probe the crevices in the bark with their long curved bill searching for arthropods.  My encounter with this species could not have been more random and lucky as I was returning to work to search for Golden-crowned Kinglets and happened to see this little guy zip across the road in front of my car and land on the palm trunk immediately to my left.  It was accommodating as I tried to be as calm as possible while I stopped the car, turned down the radio, rolled down the window, grabbed my camera and snapped off several pictures of this gem.  It worked up the trunk in a characteristic spiral movement allowing me to get several great images.  Having a species that only shows up on the Island every 5 years offer me this great opportunity to see, identify, photograph and observe behavior was truly amazing.

My daily survey species counts are starting to dwindle with some of the birds I’ve been accustomed to throughout the past several months disappearing for a day, then 3, then a week.  The daily totals are dipping into the low 30s with a few in the mid-20s when the weather is poor.  I suspect the next 6 weeks will continue to offer the usual 2-3 dozen species with some individual birds that will become our winter residents and the occasional passer-by moving south adding a bird or two to the total list.  I’ll be looking to the sky for Greater White-fronted Goose or off in the distance on Offatts Bayou for the bay ducks that have eluded me through this year.  I am thankful that these birds are giving me the excuse to take the long way in to work and spend a few extra minutes outside as I deliver paperwork and tackle other administrative tasks around property.  As Henry David Thoreau wisely proclaimed “Consider it a day wasted that one does not take a walk in nature”

In the Moody for Delicious Food!