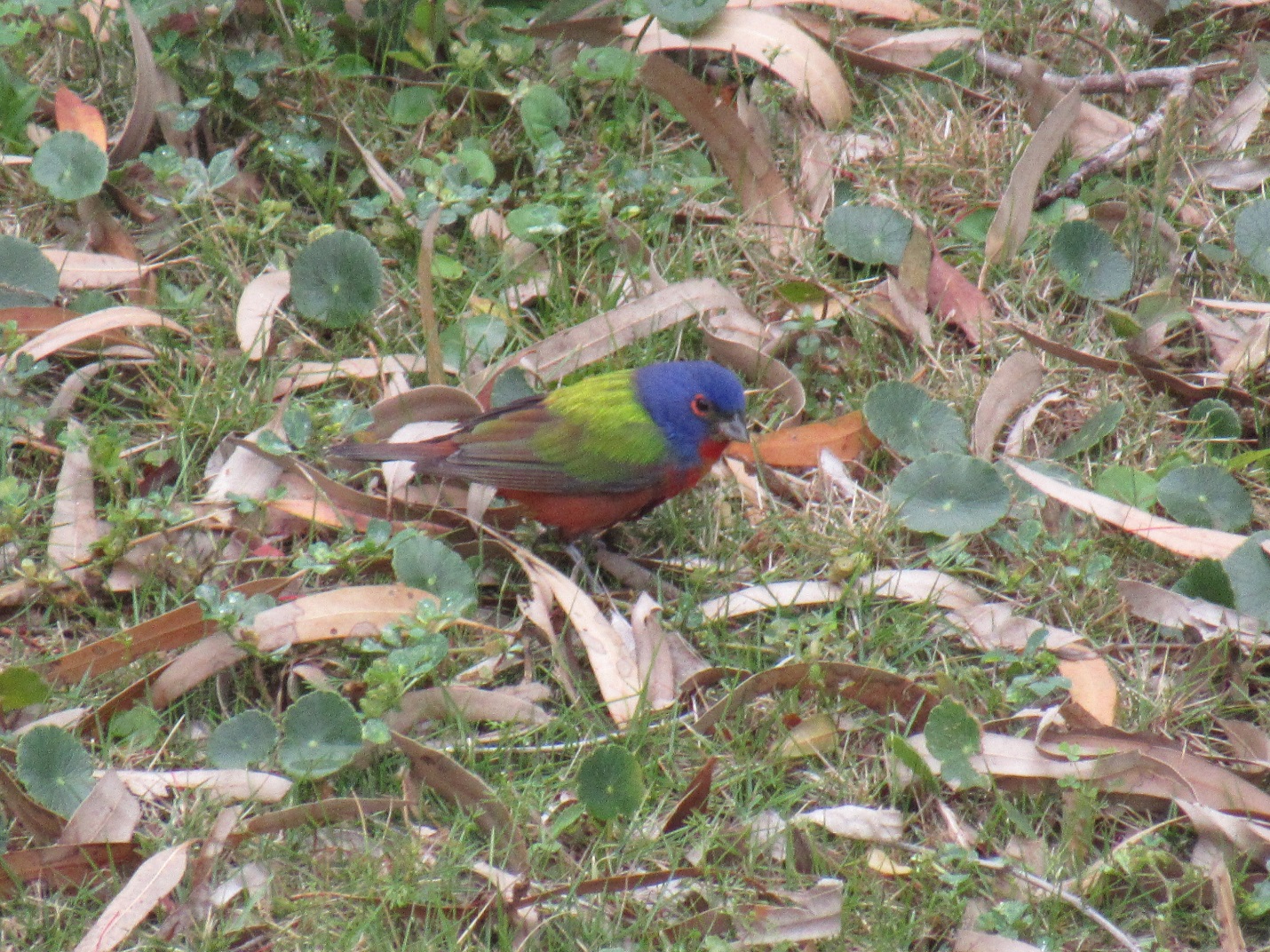 The Birds of Moody Gardens – Fallout!

During the spring migration here on the Gulf coast, there is a phenomenon known as a fallout.  If you’re a birdwatcher and you find yourself along the Texas coast in April, you keep your eyes to the sky and watch the weather forecasts.  If you are lucky (and the birds are not), a fast moving frontal boundary moves south at the exact time that flocks of migrating songbirds are winging there way north across the vast open water expanse of the Gulf of Mexico.  Under perfect circumstances these dainty warblers, vireos, buntings and orioles catch favorable winds and make the 500 mile flight from the Yucatan Peninsula to our coast in about 18 hours and have ample energy to find shelter, food and water someplace on the coastal plain.  If however, they make that commitment and leave the sight of land to our south and then run into strong head winds, the crossing quickly turns into a life and death struggle with many not making it to the northern shoreline.  Those that do arrive are completely depleted of energy and collapse in exhaustion in the nearest safe cover they can find.  This is called a fallout as the birds will literally drop from thousands of feet in the air over the first piece of solid ground they encounter.

If you’ve been outside on property over the last couple of days, you most probably have noticed a LOT of small, colorful, chirping birds moving around in the trees and shrubs all across the project.  The combination of the strong cold front that arrived overnight Saturday and the continued northeast winds through Sunday have stopped thousands of birds here on the Island.  They are resting and foraging for any quick nutrition and energy they can get including bugs, berries and seeds.  The diversity of species through the entire spring migration is truly amazing, but when you see it suddenly over the course of a few days it’s exhilarating.

The very colorful bird pictured above is a male Painted Bunting.  These guys look like something imagined by a creative child and the super-deluxe Crayola box.  Often in mixed flocks with their equally brilliant cousins, the Indigo Bunting, they work along hedges and the edges of wooded lots picking seeds and insects from the leaves and grass.  Normally the males of these migrating birds will move north first to stake out prime nesting habitat and await the arrival of the females.  It’s critical that they wing quickly north to find the perfect balance of food, water and shelter and defend those resources.

As favorable weather conditions return and these birds refuel, they will be moving on to the north towards their nesting grounds.  The spring migration will continue through the next 4-6 weeks, so there should be a continual rotation of individuals and species moving through our area.  If you get a chance to get out on property over the next few days, please take advantage of this rare spring fallout.  The number of individuals and diversity of species isn’t something to take for granted as this type of event is something that occurs every few years when the exact conditions coincide.

This morning as I walked in to work I was distracted by hundreds of individuals of dozens of species flitting amongst the foliage.  I was reminded that just as these lovely songbirds make their way north following the food resources; they bring with them a cadre of Avian predators that reap the bounty of this moving buffet.  I was just framing a picture of a nice male Painted Bunting just like the one pictured above when an American Kestrel whizzed past and scooped him up for breakfast. As the saying goes “a bird’s gotta eat”.  I saw a Merlin yesterday hunting around the north marsh near the tree farm terrorizing a similar group of Buntings.  The falcon species are specialists at hunting fast moving prey, especially birds.

‘One Earth, One Choice’ Encourages Change