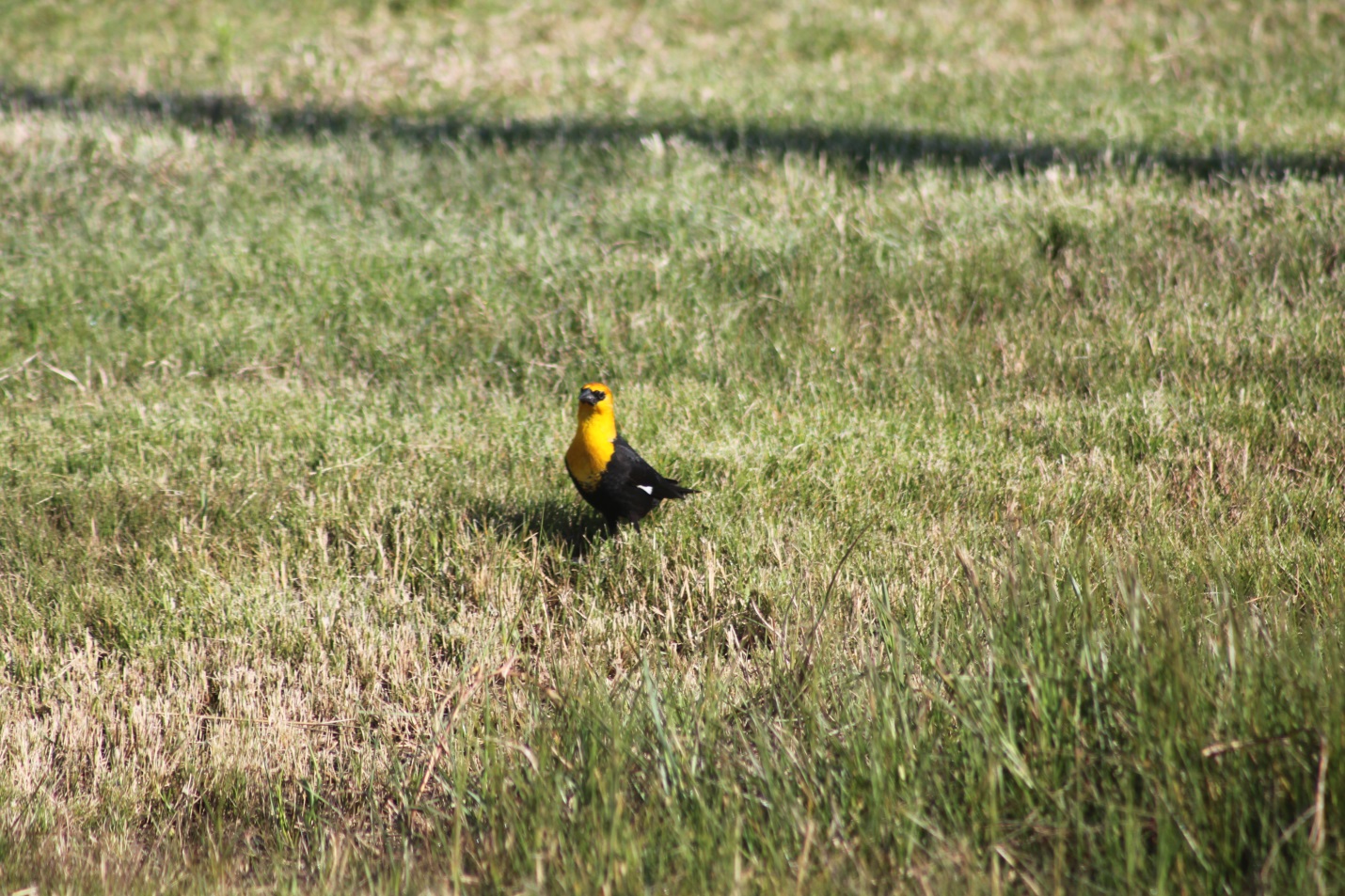 The past 2 weeks have been a phenomenal celebration of spring migration.  Since 10 April, the Moody Gardens property species count has risen from 139 to 173 with many of the new species coming in the form of colorful songbirds flitting amongst the trees and cryptically colored thrushes rummaging amongst the dark undergrowth.  I’m finding now that I’m running out of new species to look for with the list of likely additions dwindling.

One species that I would not have anticipated adding on this year-long survey is the Yellow-headed Blackbird pictured above.  Thanks to Megan Foshee in Education for noticing this brightly colored specimen and passing the info along quickly so I could hunt it down and get some great pictures.  This is a western species that rarely makes an appearance out here on Galveston Island.  Photographically capturing a handsome male specimen here on property is certainly a lucky event.

As it turns out, I saw a second rarity later this same afternoon.  As I was driving out to look at the marsh habitat on the northwest edge of property I saw a Cuckoo flying off from the large pile of trees and branches being staged for grinding into landscape mulch.  It was a comical affair as I jumped from my still-running car and tried to sneak up on this wary bird moving west.  The cuckoo made its way down the northernmost row of trees in the experimental tree farm as I paralleled down the south edge of the plot, never getting close enough for a good photo.  I was at least able to confirm it was a Yellow-billed Cuckoo for submission to eBird.  It inspired a bit of poetry I’m calling CuckooHaiku:

Need pictures, must get ahead

This past week was the 17th annual Featherfest hosted by Galveston Island Nature Tourism Council (GINTC).  This official “migration celebration” has grown from a simple local affair into one of the premier birding and photography festivals attracting 600+ participants from all over the United States and beyond.  Through the 6 days of organized activities, there were over 240 species seen or heard, making this year one of the best on record.  I had the great pleasure of hosting Greg Miller at my house again this year.  If you’re familiar with the movie and book named “The Big Year”, Greg is one of the three primary characters (played by Jack Black in the film).  I was able to bird with him a few times this year and thoroughly enjoyed soaking up all his helpful hints on bird identification and behavior.  Casting Jack Black to play Greg was brilliant as he’s just one of the most genuine, positive people I’ve met.  Greg told me that this past Sunday was the second best Texas warbler day he’d ever had, with the first being his “Big Year” day 20 years ago at High Island.  That’s pretty great praise for Galveston Island’s habitat as we only visited 3 places on the Island, and Lafitte’s Cove Nature Preserve wasn’t even one of them.  Greg will be back again next year to lead trips, so I’d advise anyone that’ interested in a fun field trip to sign up early.

There are still a lot of spring migrants moving through our area and we’ll see a few new species coming through in the next 3-4 weeks.  Please don’t hesitate to contact me directly if you have questions on where to go on property, or in the general Galveston area for birding.

The Birds of Moody Gardens – Fallout!