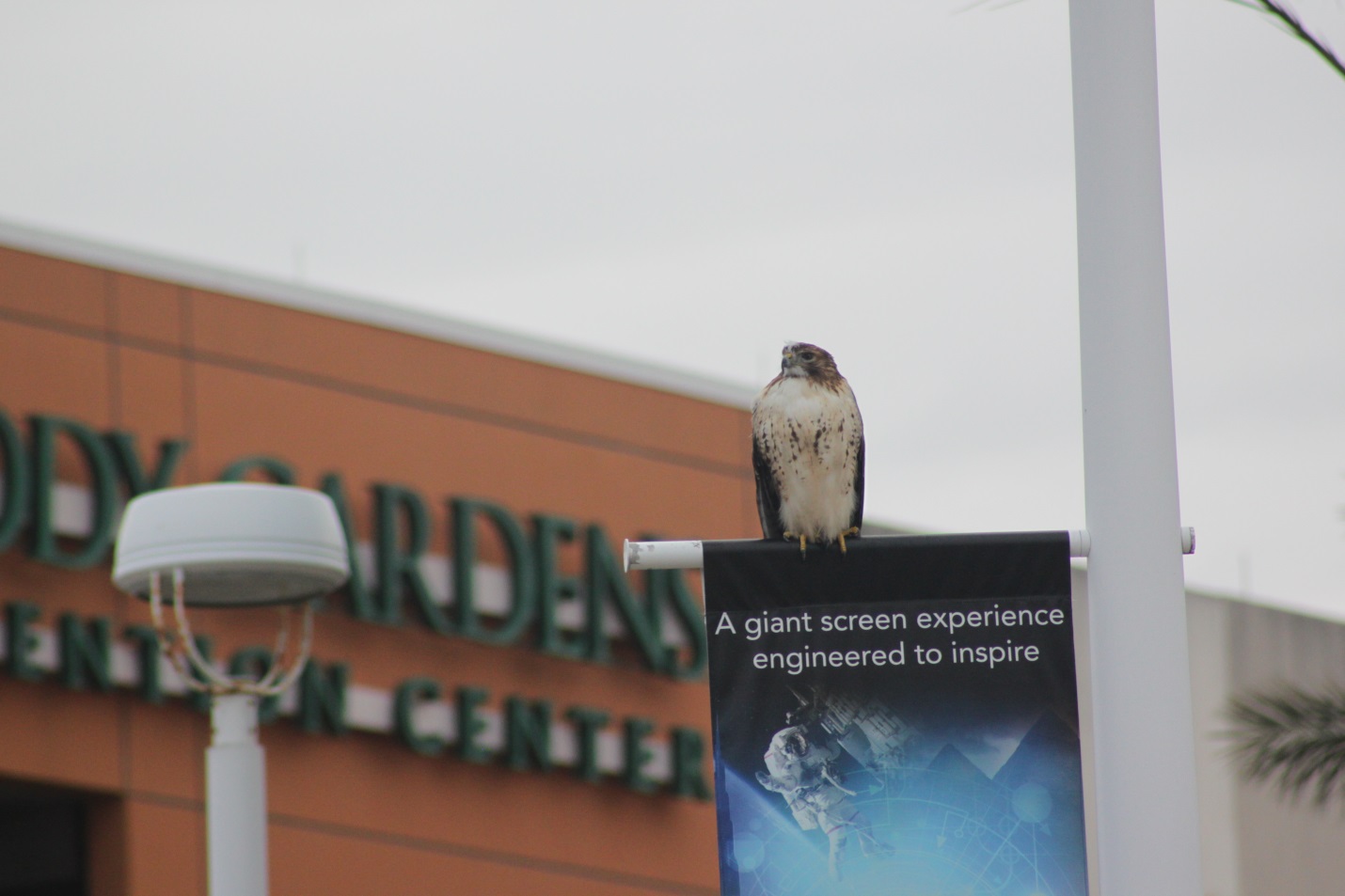 The Birds of Moody Gardens – January

In an effort to showcase the tremendous bird diversity that exists on Moody Gardens’ property, I began to survey as much of the easily accessible areas on as frequent a basis as I could, beginning with the New Year.  Throughout the month of January I spent about an hour a day looking at the various habitats that our 242 acre property boasts.  From the waterfront wrapping more than a mile around our east and north shorelines through the wooded areas in the interior, the prairie and marsh on our northwest border and the man-made retention ditches between the Aquarium and the west parking lot there is a wide variety of habitat for birds to utilize.   I drove approximately 2 miles on my morning commute as many days as my schedule and the weather allowed.  I repeated this on any trips off property during the day and when I left in the afternoons to catalog as many species as I saw on or from property.  As the end of January approached, I spent a morning photographing birds and walking the areas that weren’t accessible by car.  I also took the advice of a colleague and surveyed the Moody Gardens Golf Course located just west of Scholes Field.  Through the end of the month I checked off 76 species for our main property with another 9 at the Golf Course.

Galveston Island, and Moody Gardens’ winter bird diversity skews towards Raptors like the Red-tailed Hawk pictured above, and Waterfowl.  Raptors sighted on property during January included Osprey, Northern Harrier, Cooper’s Hawk, Red-tailed Hawk, Crested Caracara, American Kestrel, Merlin and Peregrine Falcon.  A Sharp-shinned Hawk was seen at the Golf Course on the January 31st survey.  Additionally, a White-tailed Hawk was seen on the wires at the very south end of the airport property that would technically be visible if viewed through a scope from the mulch pile/tree farm area, although not included in the total species count.

Waterfowl diversity was primarily noted on the Golf Course with the pond habitat that these species prefer.  We did encounter Snow Geese, Gadwall, Mallard, Mottled Duck, Lesser Scaup and Red-breasted Merganser from our main property.  The Golf Course survey added Blue-winged Teal, Green-winged Teal, Northern Shoveler, and Ruddy Duck to the list.  The Snow Geese are fly-overs that don’t typically utilize any habitat out here on Galveston Island.  The Mallard are almost certainly domestic strain as the few wild Mallard we see are spooked by humans and would not typically use ponds that have human disturbance.

A complete list of the 76 species encountered on Moody Gardens main property in January is listed here in Taxonomic order:

The additional 9 species encountered on the Golf Course survey include:

The spring migration should add dramatically to the diversity already encountered.  Monthly updates through 2018 will offer additional information on specific habitat areas on our property and some of the ecological premises behind migration and resident populations.

There’s more to love this Valentine’s at Moody Gardens