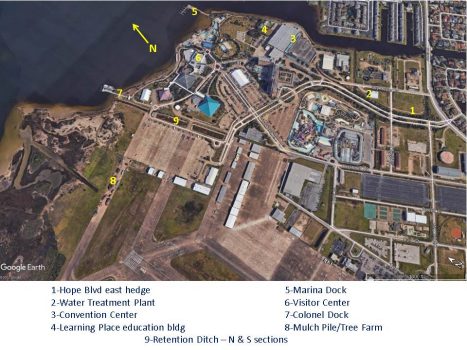 Yesterday I found myself taking a deep breath.  The spring migration seemingly came to an abrupt end as I flipped my calendar from April to May.  The combination of southeast winds and calm weather purged our coastal habitat of all those colorful Passerines that took a brief rest stop here on our Island.  Last night as I completed my eBird lists for the weekend and transcribed all the species tallies into the excel file I’ve been using to track sightings, the magnitude of what happened through the month of April was striking.  I offer my sincerest apologies to my family, friends and colleagues that weren’t as obsessed with birds this past month as I clearly was.  I realize looking at the number of species encountered, and moreover, the time spent looking for them, that April is by far the birdiest month of the year for us here in Galveston and for this project here on the Moody Gardens property and Golf Course.

During April the property species list jumped from 111 to 179 and the Golf Course list saw a similar jump from 73 to 114.  There continue to be 11 species seen at the Golf Course that were not encountered here on our main property, yielding an overall species total of 190 for this year-long project as we enter only the 5th month.  There will continue to be spring migrants working through this area as we move through May and early June, but the main influx of birds moving north is mostly complete.  I’ll be looking for a handful of shorebirds and perhaps another 2 or 3 Warblers over the next month.  After that, the birds that can be seen from property should stabilize until we start to see the dribble of the fall migration moving more slowly through the area in late August or early September.  Looking at the list of possibilities that might be tallied through the summer, I’d only anticipate adding perhaps another dozen species to the overall count before the cooler weather near the end of 2018.

The property map above is a good depiction of the various habitats here on Moody Gardens that have been the best locations for seeing resident and migratory species.  I’ve inserted numbers that loosely follow the order that I typically survey when I drive on property in the morning.  In early April I started doing a slow drive down the east side of the hedge running down the east side of Hope Blvd.  This area proved to be a great location to see a variety of the more cryptically patterned thrushes and small ground warblers using the shady cover as they foraged through leaves for insects.  The water treatment plant is a good reference building with a large mulberry tree and cluster of bottlebrush plants in the east hedge along Hope Blvd.  There is also a water slough that runs under Hope Blvd from Schlitterbahn and out to the Lake Madeline channel that borders our east side of property.  Incidentally, I have been surveying this shoreline starting at the Jones Drive bridge in the top right corner of the map by driving out the gravel roads by Galveston Rentals and around the south fence line of the Municipal Sewage Plant.

Locations 3 and 4 are the areas where I survey the Lake Madeline channel and old marina near the apartments to the northeast of Moody Gardens.  The heavily vegetated areas around the west and north sides of the Learning Place education building proved to be excellent locations for the migratory birds as well as a nesting aggregation of Yellow-crowned Night Herons and Green Herons.  The mulberry tree along the southeast corner of this complex as well as the bottlebrush in the south courtyard of the Learning Place were hotspots for warblers, tanagers and vireos while the low, dense shrubs to the west of the entry door were excellent places to look for thrushes, ovenbirds, waterthrushes and an elusive Swainson’s Warbler.

The entire shoreline between the Marina Dock and Colonel Dock were viewable along the tram road running south of Palm Beach and north of the Visitor Center, Rainforest, Discovery Museum and large white tent.  During the peak of the migration onslaught, I added a stop to look through the large oaks and shrubs on the south side of the Visitor Center with a few late migration additions showing up in that canopy area.

The mulch pile, experimental tree farm and north marsh are a large area that didn’t receive as much attention as it probably should have.  Access to these areas requires walking and the prairie and marsh habitat tends to be a bit soggy at times and harbors hungry mosquitos, so be forewarned that it’s not an easy stroll down sidewalks or tram trails like the other areas on property.

Finally, the retention ditch on the west side of the Aquarium continues to be a great showcase for shorebirds and wading birds as well as a few warblers and buntings.  This feature is primarily a freshwater runoff retention area with some saltwater influence from Aquarium operations.  The sediment and nutrient inflows create a prolific vegetation community that then provides habitat (shelter) and a dynamic food web that attracts and supports the birds that seem to thrive in there.