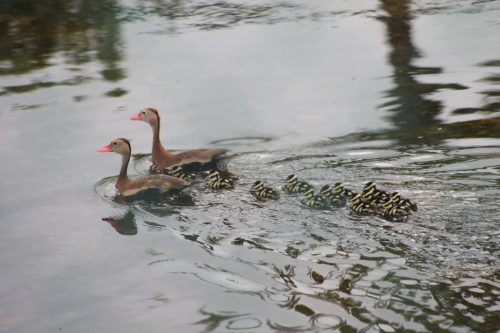 Historically the birding activity from about mid-May through early September is slow, hot, buggy and generally unrewarding.  From a species diversity standpoint, this year’s activity follows the expected trend with only 6 new property species added since early May.  With the Moody Gardens property total stuck on 185 and the golf course tally at 121, the past several weeks’ surveys have seemed pretty stagnant.  On 12 July, I was able to add Whimbrel with one grazing through our northwest marsh area to end a 50 day stretch without a new species.

As I enter daily surveys into eBird and check off boxes on the excel spreadsheet, I have to remind myself that encountering 25-30 species a day on a 240 acre property is actually pretty special.  Researching more exotic birding locations in preparation for trips to South Texas and Colorado recently emphasized how lucky we are here at Moody Gardens.

These summer observations have allowed me to focus more on what the species and individuals are doing in their day to day activities rather than simply looking to add to the overall species counts.  Several species use various habitats here on our property to nest and raise their young.  Late spring through early summer is the prime time for many of our resident species to bring up offspring.  The large rookery of Yellow-crowned Night Herons and Green Herons in the oak trees around the Learning Place was very productive this year.  At its peak there were at least 17 active YC Night Heron nests with between 2-3 chicks of varying ages being raised.  The Green Herons seemed to stage their activity a little later than the YCNHs and I counted up to 11 of those active at one time.  This morning’s survey only yielded one nest with 2 YCNH young that appear close to fledging.  Several species nest in the retention ditch on the west side of the Aquarium.  Although this location offers good cover and protection from predators, it is prone to flooding when we receive heavy summer rains.  Despite the risks, there were at least 2 successful clutches of Black-necked Stilts and 3 successful Killdeer broods in that area this year.

Yesterday morning I was surprised to see a brood of newly hatched Black-bellied Whistling Ducks in the dense southern half of the ditch.  I counted 12 little “bumblebee” ducklings following closely behind their wary parents.  Having large clutches is an evolutionary strategy designed to account for losses from predation.  These cute little fuzz balls have some challenges ahead avoiding all the other hungry herons, egrets, gulls and even turtles looking for a quick meal.

Even as we’re watching the tail end of breeding, we’re starting to see some of the early fall migrating species showing up again on their way south.  Least, Semipalmated, Spotted and Solitary Sandpipers showed up on this week’s surveys.  Yesterday there was a large flock of Orchard Orioles winging their way back across our Island for their winter “vacation”.  It seems quite early for species to be moving back south, but it does add some excitement into the daily surveys.  It also reminds me that creating a large data set like this year-long property survey will help answer bigger picture questions on climate change, and altered phenologies (plant and animal life cycles related to alterations in climatic patterns).

Keep your eyes to the skies in anticipation of increasing numbers of birds flying over, or to our tropical Island paradise.