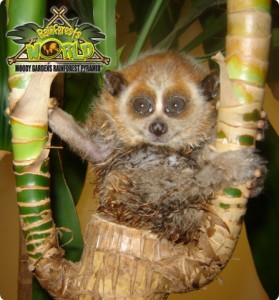 My, what big eyes you have! While you won’t find Little Red Riding Hood in the Rainforest Pyramid, you will find the Pygmy Slow Loris (Nycticebus pygmaeus). This prosimian (before the monkeys- or primitive primate) is just one type of the many primates you will encounter when life emerges at the Rainforest Pyramid on May 28th.

Pygmy Slow Lorises are found in the rainforests of Cambodia, China, Laos and Vietnam. They are extremely endangered in Vietnam, where decades of military activity have damaged their habitat. (as well as more recent habitat destruction)  These nocturnal, tree dwelling primates survive on a diet of insects, fruit, slugs and snails. During the day you might see one curled into a tight ball clinging to a branch high up in the rainforest canopy.

These small creatures (18-21 cm long) are characterized by their round head, large eyes, small ears, stumpy tail and their short and wooly fur. The Pygmy  Slow Loris also has front teeth that are arranged to provide a comb like structure called a “tooth comb” that is used to scrape resin from a tree and to clean its fur.  In addition to the tooth comb, they also have an under tongue that contains hardened points of horn. This second fleshy comb is used to clean the tooth comb.

Lorises are mainly solitary animals, only coming together to mate. The female will usually give birth to one or two babies every 12 to 18 months after a gestation period of 190 days. For the first seven months, the youngling will cling to its mother and it will nurse for six weeks. Young lorises may call to their mother using a series of clicks and squeaks when in d istress. For the most part, vocal exchanges are limited to remain inconspicuous and communication is mainly carried out by scent marking.

People say imitation is the sincerest form of flattery. The Pygmy Slow Loris must be out to flatter reptiles. When threatened, they will imitate an angry cobra by hissing, whistling and moving in the deliberate manner of a serpent. If the threat continues, they will deliver a toxic bite to its aggressor. The bite is toxic due to glands inside of the elbow that secrete a toxin. The loris will lift its arms up and lick up the toxin before delivering the painful bite.

Another interesting fact is that lorises have specially adapted blood vessels in their hands and feet that allow them to hold onto branches tightly for many hours at a time, even when sleeping.  They will walk slowly (thus the name) but surely on the branches, carefully putting one foot in front of the other. As sluggish as they appear, they are excellent climbers and very quick and accurate when hunting prey.

The name “loris” is believed to be derived from the Dutch word “loeris”, which means clown because their eyes and facial markings resemble a clown’s makeup.

Check out our video featuring the Pygmy Slow Loris!