Sweethearts of the North Pacific: Presley and Porter 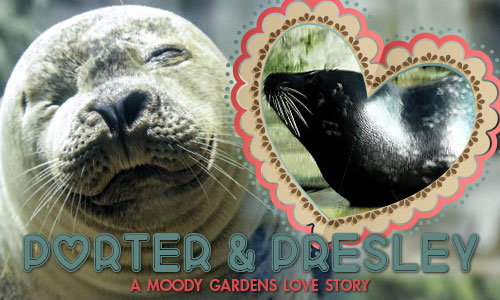 One of the Moody Gardens Aquarium Pyramid’s most famous couples is Porter and Presley. These harbor seals met in 2006 and immediately became inseparable. 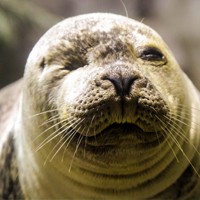 Porter, who was rescued as a pup off the coast of Maine after being abandoned by his mother, made his home at Moody Gardens in 2001. He had excellent care by the staff at Marine Animal Lifeline Rehabilitation Center, where unfortunately an infection caused him to lose his eye. 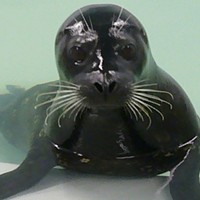 Five years later, Presley joined the Moody Gardens family. After her companion at the Memphis Zoo passed away, caretakers knew the young harbor seal needed a companion. Even though Porter had fur seals and sea lions in his North Pacific Exhibit, the addition of Presley provided better companionship. Two habor seals together provided a more natural situation and made future breeding an option.

In 2011, Porter and Presley had a pup named Riley, after the former President of Moody Gardens Mike Riley. The couple had conceived in the past, but that was their first successful birth. 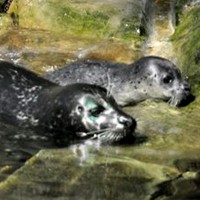 The newborn seal and first-time mother Presley spent their time together bonding through activities like nursing and exploring their exhibit. Riley has since moved to the Gladys Porter Zoo in Brownsville, where she has two young males to hang out with and possibly have pups of her own.

You can visit Presley and Porter at the Sea of Love Valentine’s Day dinner on Feb. 13 and 14. This romantic dinner includes a three-course meal, rose for her, souvenir photo and Aquarium Pyramid admission. The Feb. 14 dinner also includes a bottle of wine or champagne.