A Look at the Moody Gardens Outreach Program 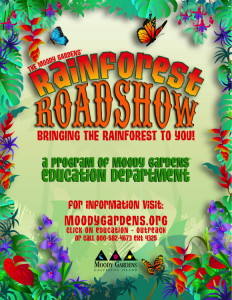 Are you an educator or parent interested in helping your kids learn more about the rainforest? If you can’t make it out here for a field trip, but still want to bring the knowledge and excitement of Moody Gardens to your students, you may be interested in our Outreach Program.

The Rainforest Roadshow features multiple interdisciplinary presentations that incorporate rainforest artifacts, plants, and animals.  Certain animals, when available, will actually accompany the rainforest expert during the presentation. Throughout the presentations, your students will learn valuable and interesting information about the Central and South American rainforest.

Presentations are forty-five minutes long and available for up to eighty students at a time. Price is based on location. For presentations within Region IV, the first presentation is $100.00. You can schedule additional presentations for $75.00 and up to four presentations in a single day.

Presentations outside of Region IV include a mileage fee. Reservations are required, and they must be made at least two weeks in advance. We recommend booking your Rainforest Roadshow as early as possibly so you can reserve the time slot you want.

Moody Gardens is a public, non-profit and educational destination, which is why we are dedicated to teaching the youth about nature and conservation. To learn more about the educational events and activities we provide, visit us at http://www.moodygardens.com/teaching_learning/.

Moody Gardens is also dedicated to providing our visitors with a fun and memorable time, so be sure to visit our Aquarium Pyramid and Rainforest Pyramid. The Moody Gardens Hotel is one of the best places to stay in Galveston and a popular vacation destination.

Ways to Get Involved with Moody Gardens: Volunteering 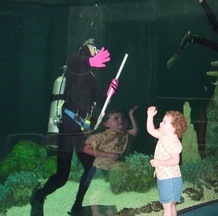 One of the easiest ways to get involved with Moody Gardens is to become one of our many valued volunteers! As a public, non-profit organization, we really count on our volunteers to keep Moody Gardens awesome.  We believe our volunteers are essential in making sure each and every guest has an unforgettable experience with us.

Volunteers offer help in a variety of departments throughout all of Moody Gardens. Volunteering with us is not only a help to the community, but also an incredible opportunity to learn more about Moody Gardens, nature, and conservation. We are very flexible with our volunteering schedules, so you have the opportunity to volunteer as much or as little as you want! We appreciate any amount of time you are willing to share with us.

The current volunteer opportunities at Moody Gardens are for:

You can also sign up today to help out with the famous Festival of Lights! We have thousands of visitors each day coming to see the millions of lights, drink hot cocoa along the trail, and enjoy the live entertainment, so we need more helping hands!

When you aren’t volunteering, be sure to visit Moody Gardens for fun Galveston events. Don’t miss out on the Aquarium Pyramid this season!

For the first time in its 22-year history, Moody Gardens’ annual Adaptive Water Sports Festival is teaming up with the U.S. Paralympics for a unique experience for individuals with special needs. This event allows participants to experience several water sports, including water skiing, sailing and kayaking, with the assistances of special equipment and instructors. The U.S. Paralympics team, TRR Texas, will also demonstrate its skills with a kayaking time trial as part of the Paralympic Experience.

Here are three inspiring stories from some of the people attending this weekend:

My name is Kelly Allen. I was born with Proximal Femoral Focal deficiency (PFFD) type D. This is a rare, non-hereditary birth defect that affects the pelvis and the femur. However, because I am a type D I am totally missing my left femur, patella, and fibula, along with a fully developed hip socket. Because of this birth defect I have learned to adapt to everyday life using my prosthetic leg. Basically, the left side of my lower body didn’t develop and I look like I only have one half of a leg. Doctors told my parents I would not be able to sit or stand let alone participate in any sports.

However, today I am more active than ever! Having taken home 4th place at the 2012 ICF Sprint World Cup in Poznan, Poland for kayaking I am now considered an elite athlete. Along with kayaking, I am on my way of living my dream of becoming a world class ski racer and an athlete in the 2014 Sochi Russia Paralympic games! 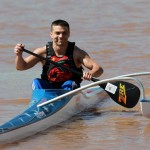 Dylan is ranked 6th in the world for ParaCanoe V1 TA after representing the United States this past May at the ICF Sprint World Cup in Poznan, Poland. Brown, a native to Pensacola, Florida started his promising career as a US Marine during his junior year in high school. Taking on the role as a Platoon Radio Operator, Brown was deployed to Afghanistan in March of 2011. Only a few months on the job Brown suffered serious injuries in the field after being electrocuted. He has been recovering since in the Brook Army Medical Center in San Antonio, TX.

It is here in Texas that his kayaking career has only just begun. Dylan participates in the Red River Racing Kayak program on base held at the Center for the Intrepid. It is there that he took his kayaking skills from intermediate to the elite level. Brown took second at US Nationals in Oklahoma City qualifying him for the national team. Brown is now working with a Military Paralympic program to help him reach his full potential on the water in hopes of making the 2016 Paralympics in Rio de Janeiro, Brazil. 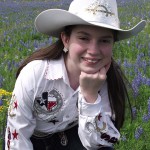 Tacey was diagnosed with an extremely rare cancer, Retinoblastoma, when she was 7 ½ months old. Retinoblastoma causes malignant tumors to form in the eyes of infants. When she was diagnosed, the doctors were not very optimistic that Tacey’s eyes could be saved but they were willing to attack the disease with some aggressive chemo in the hopes of saving at least some of her vision, but more especially, her life. Only six weeks into the chemo, the doctors realized her left eye could not be saved. Her left eye had to be removed and years later, after fighting to save her right eye and as much vision as possible, the doctors and her parents came to the realization that in order to continue to save her life it was necessary to also remove her right eye. One month before her 7th birthday, Tacey underwent the surgery that would leave her blind.

Cancer may have taken her sight, but it has not taken her courage. Soon after she lost her second eye, she rode her first horse and a new passion and dream was fueled. Now those dreams are being realized as she reigns as the first ever Miss Tough Enough To Wear Pink Four States Rodeo Queen. During her reign, Tacey has many duties, but her primary task is to spread her uplifting spirit and to encourage others to set their sights high. Wherever Tacey goes, she spreads hope, inspiration and encouragement with her joy and zest for life. She shares her story and courage with all she meets.

It’s not too late to register or to volunteer! This event is scheduled for Sept. 8 from 10 a.m. to 4 p.m. at Moody Gardens’ Palm Beach. It is free of charge to the individual with special needs and immediate family members on a first come, first serve basis. For more information please contact volunteers@moodygardens.com or call 409-683-4108. 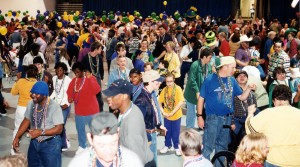 Perhaps, one of your new year’s resolutions was to meet new people, get involved in the community or volunteer more. Well, you can do all of that by volunteering at this fun event.

No one needs to miss out on the Mardi Gras experience in Galveston. Moody Gardens will host the 24th Annual Mardi Gras Ball for Special People on Sunday, Feb. 7. Annually celebrated by thousands of people with special needs, this free event is hosted by Moody Gardens and made possible by hundreds of volunteers who contribute their time, supplies and services.

This year’s theme is Masquerede, and entertainment will include a local Galveston band Mid-Life Crisis.  To make the event free to all attendees, contributions have been made by numerous volunteers, Moody Gardens and other local businesses. Participants can enjoy donated food, refreshments, plenty of beads, clowns, face painters and a dance contest. This year, there will also be a costume contest and costumed characters.

We are looking for volunteers to assist with the table set-up, decorations, ushering, serving food and dancing with the guests. It’s a win-win situation where both participants and volunteers can have a good time.

The event is scheduled for 12 noon to 4 p.m. at the Moody Gardens Convention Center Expo A and B. For event registration and volunteer information, please contact Moody Gardens® at 800-582-4673, ext. 4108.

AT A GLANCE
What: Mardi Gras Ball for Special People
When: Sunday, Feb. 7, 12 p.m. – 4 p.m.
Where: Moody Gardens Convention Center Expo A&B
Who: People with special needs and their immediate family members are invited. Volunteers are always welcome and appreciated.
Information: 800-582-4673 ex. 4108 or volunteers@moodygardens.com

Check this out if you are a teen or young adult between ages 14 and 21 – We will soon start a program chartered by the Boy Scouts of America called Venture Crew at Moody Gardens. It is a new initiative to promote education and awareness about the environment through variety of unique conservation activities.

As some of you might know, Moody Gardens is a nonprofit organization, and promoting conservation is one of our important missions. This is a new approach to helping youth learn about the world we live in.

So why should you join Venture Crew? The program focuses on your interest and your way of doing things. You will be able to learn how natural environments function and how human beings can manage their behavior and ecosystems so we can coexist into the future. You will get to pick the conservation topics of your own interest, such as coastal restoration, rain forest conservation and protection of living inhabitants including birds and coral reefs, and participate in activities that go along with your topics. There are also opportunities to attend Venturing camps and trips with other members. But you are not alone; trained Moody Gardens advisors and consultants are here to provide support and share their knowledge in environmental leadership.

Venturing is a nationwide program designed for men and women between the ages of 14 and 21.  Each chapter or Venture Crew focuses on a special interest of choice such as computer science, medicine, engineering or conservation, and is sponsored by community organizations such as local schools, churches, businesses and government, and in this case, Moody Gardens.

If you are interested in getting involved, we invite you to attend the Moody Gardens Venture Crew Open House from 7 p.m. to 9 p.m., Monday, Dec. 7. For more information about the program and the open house, please contact 409-683-4108 or visit http://www.moodygardens.com/get_involved/venturing/.

AT A GLANCE
What:  Venture Crew Open House
When:  Monday, Dec. 7, 7 p.m. – 9 p.m.
Where:  Learning Place, Moody Gardens,
Who:  Teens and young adults ages between 14 and 21
Address:  One Hope Blvd. Galveston, TX 77554
Information:  409-683-4108, moodygardens.org
Summary:
During the Open House, youth will learn about Venturing and Moody Gardens Venture Crew, be able to ask questions, participate in hands-on activities and be invited to join the Crew.