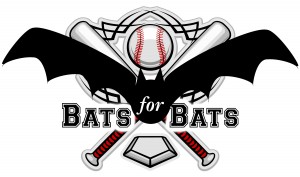 2012 is Year of the Bat and we’re celebrating it with Bats for Bats! We’ll be having a series of online auctions for the coming weeks. Each sports memorabilia was generously donated to support bats and their important role in the environment. The money raised from these items will be donated to Bat Conservation International to fund crucial education and awareness. 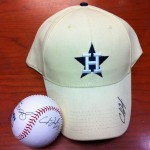 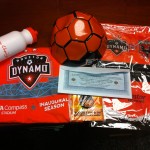 Dynamo Fan Pack with Two Tickets for any 2013 game 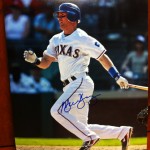 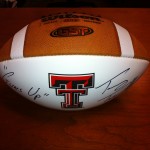 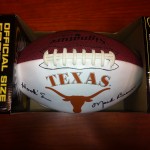 Bat Facts: What’s with the hanging? 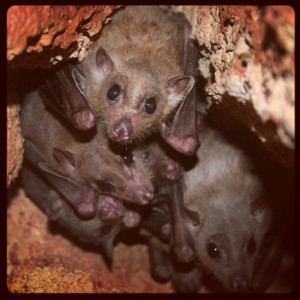 Q: WHY DO BATS HANG UPSIDE DOWN?

A: Unlike the bodies of other animals, a bat’s body is best adapted for hanging upside down. Its hind limbs have rotated 180 degrees so that its knees face backwards. This rotation aids in the bat’s ability to navigate in flight and to hang by its feet. Bats actually have specialized tendons that hold their toes in place so that they are able to cling to their roosts without expending any energy. In fact, bats must flex their muscles in order to let go of the roosting surface. These adaptations are quite helpful for a flying mammal since bats only need to let go of the roost in order to drop into flight. Hanging upside down also provides bats with roosting space away from predators in safe places on the ceilings of caves, in trees, and buildings that few other animals can use because they have not evolved to hang upside down by their feet.

Save the Date: Bats Are Doin’ It 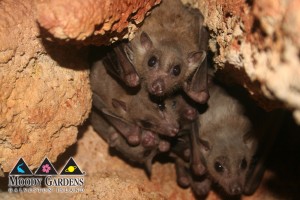 The “Bat’s Are Doin’ It” fundraiser will bring attention to the ecological importance of bats such as eating their weight in harmful insects and pollinating many economically valuable crops including bananas and mangoes. Guests will leave with a new appreciation for this misunderstood animal species; which will assist BCI in their efforts to protect bats.

Enjoy a special evening celebrating the mysterious creatures with a tasty bat- themed food and drink menu. The night will include a cocktail party, special guest speaker James Eggers from Bat Conservation International and a tour of the Rainforest Pyramid®. This event will give you the chance to help save an often overlooked animal species while celebrating the special holiday.

SAVE THE DATE: Bats Are Doin’ It: A Fundraiser for Animal Lovers

• Other Information: Raffle tickets can be purchased upon arrival to the event. Prices are $5 for 1 ticket or $10 for 3 tickets.Prizes will include various fabulous bat themed packages.

Proceeds raised for the event will be donated to the organization Bat Conservation International. This event is open to individuals who are 21 and above only. 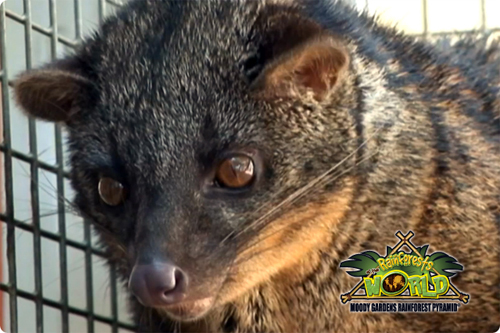 African Palm Civets are found in the forests of eastern and central Africa and are threatened due to loss of habitat. They will usually weigh between 3.7 to 4.6 pounds and are brown to light tan in color with a mottled series of darker brown spots. The fur is darker on the top half of the body to help the Civet stay camouflaged in the trees. The Civet also has bare pink pads on its feet to help provide cushioning and friction while they move and hunt. It also has a thick, muscular tail which helps with balance.  These omnivores (both meat and plant eating) will use its back feet and tail to grip and balance on branches while using its front feet to grab and manipulate prey. It will then finish off its prey with a series of fast bites. If the prey is small enough, it may swallow it whole.

Civets are arboreal (tree dwelling), solitary and crepuscular, meaning only active at dawn and dusk. Females will usually give birth to up to four young after two months of gestation. Also, the female’s mammary glands secrete an orange-yellow liquid that turns the mother’s belly and the offspring’s fur orange-yellow. It is thought this is a deterrent for males wanting to mate and to protect the young from attacks. An adult male African Palm Civet may occupy a territory of over 250 acres with up to three females occupying the same territory. Each female will have her own patch of land and will only share it with their offspring. Adult male and female civets hardly socialize, but they will keep track of each other using siren-like calls.

Smell something? Civets have scent glands on their feet and tail that secrete a fruit-like smell. These scents are used for a variety of purposes.

Watch the following video to meet Zinga and come see her and her friends on May 28th at the Rainforest Pyramid®!

(Click here if the following video is not functioning)

You “otter” see this! Come meet the newest residents of Moody Gardens® when life emerges on May 28th at the Rainforest Pyramid®. On your adventure you’ll meet Dru, Ella and Yzma, three Giant Otters (Pteronura brasiliensis) who came to Moody Gardens® on December 17 of last year.

Giant Otters are a carnivorous mammal native to South America and found mostly in the Amazon River and the Pantanal, which is an area of tropical wetland in Brazil. Otters are members of the weasel family (Mustelidae) and have the longest body length in the species. In some cases, males have reached reported lengths of over seven feet. Males in general will be about 4.9 to 5.9 feet, while females will reach lengths of about 4.9 to 5.6 feet. 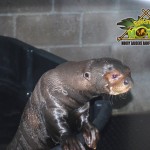 These noisy mammals have the shortest fur of all otter species and it’s usually chocolate-brown, reddish or fawn in coloration. This fur is extremely dense so much so that water cannot penetrate to the skin. Guard hairs trap water and keep the inner fur dry. These hairs are about one third of an inch long and are twice as long as the fur of the inner coat. Giant Otters also have unique markings of white or cream colored fur on the throat and under the chin, which allows individuals to be identified from birth. It is believed that these markings are used by the otter to identify each other. When meeting each other for the first time, otters will engage in a behavior known as “periscoping”. When “periscoping”, otters will pop their heads and chests out of the water to display their markings to the other. They are also characterized by their small, rounded ears and their short and stubby legs that end in large webbed feet equipped with very sharp claws that help them catch prey.  Giant Otters also have highly sensitive whiskers (vibrissae) that track changes in water pressure and currents, which aids in detecting prey. 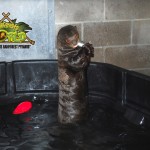 Giant Otters are diurnal, which means they are active exclusively during daylight hours. They are excellent hunters and have extremely keen senses of smell and sight. They are apex predators, meaning they have no serious natural enemies. A Giant Otter’s diet usually consists of fish, but they have also been known to eat crabs, snakes and even small Caimans. These natives of South America like to talk too.  They are the noisiest of any otter species and they have vocalizations that indicate alarm, aggressiveness and reassurance just to name a few. 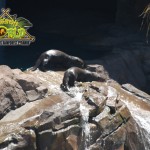 This species of otter is unusually social for a member of the weasel family. In Spanish, they are known as Lobos Del Rio(Wolves of River) and Perro de Agua (Water Dog) because they live and hunt in packs like canines. They can live in groups of anywhere from two to twenty, but the average group size is three to eight. These groups are strongly cohesive. Members will sleep, play, travel and feed together. Group members will share roles, structured around a dominant breeding pair. This species is highly territorial and they will mark their territory with latrines, gland secretions and vocalizations. Dens are built into the riverbanks and are usually equipped with multiple entrances and chambers. After a 65-70 day gestation period, females will give birth to around one to five pups. After two years the young otters reach full maturity and will leave the family group permanently.

Giant Otters have been categorized as endangered by the International Union for Conservation of Nature (IUCN) since 1999 as a result from poaching and loss of habitat. Moody Gardens® is one of six zoos and aquariums in North America that feature Giant Otters.

Watch the following video to learn about Dru, Ella and Yzma’s journey and see how they are adapting to their new home here at Moody Gardens. (Click here if the video below is not working.)

Rodrigues Fruit Bats have made their way to Moody Gardens! This fun and interesting species will be on exhibit in the Bat Habitat inside the newly enhanced Rainforest Pyramid, which opens in May 2011.

The multi-level Bat Habitat will offer viewing opportunities, from the new Rainforest Canopy Walkway down into a subterranean cave environment.

The species currently numbers just a few hundred in the wild and is classified as critically endangered!