Where in the World is Atlas?

It’s time to check in with Atlas, our 362 pound loggerhead sea turtle friend that we released back in July. Atlas hasn’t wasted anytime exploring the Gulf since his release. He’s been down the Texas coast and even ventured into Mexico, before heading off to the Louisiana Coast. What a detour! So where will Atlas journey to next? Maybe he’s headed to the Bahamas? Or maybe he’s trying to draw a pattern and will head back to Galveston! Wherever he goes, you can keep track of him too by visiting http://www.seaturtle.org/tracking/index.shtml?project_id=652

Here’s a little background on Atlas and his release:

Biologists from Moody Gardens partnered with officials from the National Oceanic & Atmospheric Administration (NOAA) to release 10 endangered sea turtles, including Atlas, a loggerhead sea turtle on display in the Aquarium Pyramid® since 2004. They were released on July 14, 20 miles off the coast of Galveston. 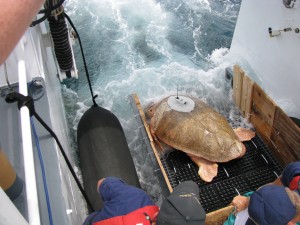 Atlas came to Moody Gardens in June of 2004 from the Six Flags amusement park in Aurora, Ohio, with the intent that he would one day be released back into the wild. Moody Gardens biologists provided for his health and welfare to help prepare for his eventual release. In 2010, Atlas was taken off exhibit so biologists could prepare him for life in the wild by allowing him to search for food on his own, thereby removing the connection between humans and food instilled in him by years of captivity.

Where do you think Atlas will end up next?

Don’t Worry, There Are No Count Dracula’s Here